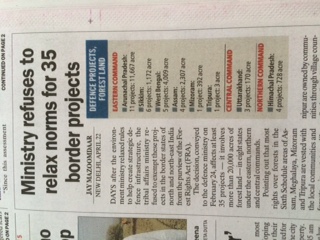 Even as Environment Ministry clears the 35 Defence projects, after how many months/years is not given in the news item, along comes the Tribal Affairs Ministry and blocks them.

This they are doing to Defence projects, not to some industry owned by some blood sucking industrialist.

This even as China is laying Railway line under the Mount Everest, and is linking Chinese mainland to Arabian sea with a Railway line through Pakistan.

If this is the fate of Defence projects, we can easily imagine the fate of any other project.

So we already have laws in place that render even Central Government unable to acquire land. Why are we then breaking heads to improve Land Acquisition Act of 2013?

The fact is, in the last ten year rule of UPA, NGOs and Leftist bleeding hearts were framing laws, which are suitable for some utopia, certainly not for a real world. A country that ties itself into knots of such intractable laws, can not survive for long.

And this also tells us about so called single window clearances. These single window clearances are a joke actually. They grant you clearance “subject to this.. and subject to that…..” so even as they claim that they have granted clearance, it is no clearance. Some Godforsaken ministry, some Tribunal, some PIL, some local body can still suddenly appear from nowhere, and block your project for good. No business can function in such environment. And without a modern economy, this country of 125 crore will not survive for long.