Govt Of India Is Planning To Destroy Jobs Of Maids In India (Is This What You Meant By Labour Reforms?) 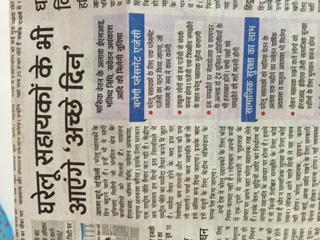 If you go to a tour of Europe, you would find hotels without attendants, restaurants without waiters, and homes without maids. So what has happened to unskilled workers in Europe? Have they all become skilled and moved to higher paying jobs?

Actually unskilled workers of Europe are all still there, only they no longer work. They live on Welfare payments. For example, in the UK, about 20% families do not have any members working. Similar is the situation all over Europe, with no unskilled workers actually working, but unemployment in 20s of percentage, and Welfare payments always ballooning, threatening solvency of the governments.

This has been the doing of Europe’s “generous” labour laws. Labour laws have resulted into the cost of an unskilled worker to the employer exceeding his productivity. And simple mathematics would show us that no private employer, howsoever labour friendly and kindhearted, etc., he may be, can keep in employment a person who doesn’t produce more than what the employer spends on him.

And so the employers in Europe have modified the businesses such that unskilled workers are no longer required, or have simply shut them down. The workers lost their jobs and signed up for Welfare payments. So in Europe now we have a rich class that deals in Finance and high tech jobs, and a huge underclass on Welfare. A model that the Left claims to fight against, but is always created by its policies.

Work doesn’t just give us our livelihood. It also builds character. A person without work, even if on Welfare, disintegrates into drug addiction and alcoholism. Families break, and as the State takes care of everything, people no longer marry, and even if they marry, they no longer have children. So the Europe is also having demographic collapse of the natives.

And so now we have this proposed law to regulate the hiring of maids in India.

There are indeed stray incidents of exploitation of, and violence against, maids in India. But then exploitation and violence are always the feature of a society that is abjectly poor, and therefore more workers are chasing fewer jobs. But to claim that maids in general are being exploited, is to show complete ignorance of the ground situation. In reality maids are in better bargaining position, extract all concessions they need, and job hop at will. Leave without notice is a constant occurrence. It may be obscene to say that they are a pampered lot, but they are not exploited either.

Whatever problems maids may have, the only solution is rapid industrialisation of India, so that their husbands have well paying regular jobs, and the maids themselves either do not need job at all, or are in a better position to bargain.

To believe that a law will keep maids safe and well paid is to live in the make believe world of The Left, who believe that there are no problems of the world a law can not solve. The only things the proposed law on the maids (the news item in the photo) will achieve are:

1. It will make each housewife and each maid a criminal, as they would move the employment underground. There is no way households are going to bear the cost of mandatory “benefits,” book keeping, filing of records with the government offices, and live with the fear of a raid by the labour inspectors.

2. It will create a whole new army of labour inspectors, activists, union mafia, and lawyers; and the cost of this army will have to be borne by the households.

3. Households will simply discontinue employing maids. It is as simple as that. Maids would lose their livelihood, and then the Left would demand Welfare measures for the unemployed maids and their families. Economy would be that much poorer. The work done by the maid wouldn’t be there, and the tax money would go not into fresh investments, but for feeding the idle maids.

Labour department has been most destructive of jobs in India. By making it an employer’s market, it has resulted into what it claims to prevent:labour exploitation. It is thoroughly corrupt also. Giving it entry into the homes, the government will destroy the only space yet out of reach of the thuggish and venal government machinery- our homes.

The agreement between an employer and his employee is a contract both enter on mutually agreeable terms, in a free market. If the maids have a better life without the employment being offered to them, they would not take up the offer. If instead her employer is bettering her life, why should State interfere? Labour laws try to rig this free market in favour of workers, by using State’s monopoly on violence. And the result is always what it is when we introduce violence in free market- the market collapses. Labour laws kill jobs, and lead to greater exploitation of the workers than before, as now more workers are chasing fewer jobs, and the employers set the terms. Off books, if required, with both the employer and the employee becoming criminals in the process.

Current government made lot of noises about labour reforms soon after it was voted into power. If this is what it meant by the labour reforms-growing the empire of labour inspectors instead of sending them home-we are doomed. We will not have industrial growth. The only thing that will grow will be Welfare programmes and work for the lawyers.