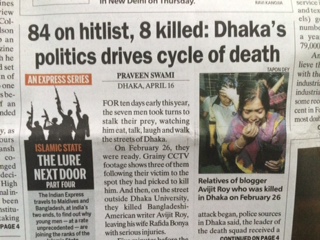 It correctly tells that the terrorists want a sharia state in Bangladesh, but that doesn’t square up with the headline it chose. It correctly tells that international terrorist networks are funding the campaign, but doesn’t tell that the tactic is ancient, and method is universal: low level, random, but unceasing violence; and silencing the critics. It is the method that works- kill the first one to cross the line, and every time someone crosses the line, kill. By murdering dissenters, no organised opposition is possible, and atomised population submits.