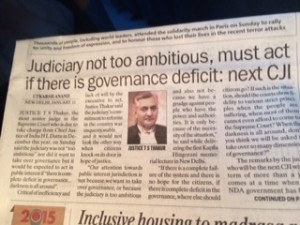 The man who would be the next Chief Justice of India, speaking at a function in new Delhi, has said that Judges need to act in case of governance deficit. Governance deficit is a fancy word invented by the Leftists to explain failure of Socialism. Socialism fails because it is a mathematical impossibility. But the Leftists have successfully changed the narrative and created the impression that it fails because those in the government are not implementing it correctly. And to correct the situation, they have now roped in Courts, which are happily playing along, trying to administer the country.

If Executive is not functioning properly, Constitution has a provision to correct the situation. It says that Executive chiefs, the politicians, have to go to the public every five year to seek its endorsement. If public finds them deficient, it can throw them out. If public makes bad choices, it is not the job of the Courts to save the public from the choices it makes, nor they can.

If their Lordships are so concerned about the situation in the country, they should leave the bench, and fight the elections and if elected, should do something about it.

Trying to make Socialism successful is not the job of the Courts. And neither they, nor anybody else can make it successful. They can only push the country into the tyranny of black robes.