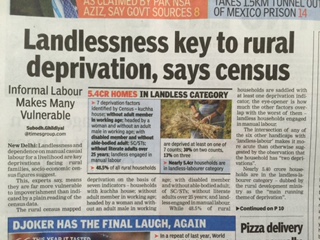 In the richest country in the world, the USA, only 1% of the population are landed farmers.

Land in India is limited. Almost all the arable land is already under agriculture. Though there is scope to increase yield by bringing under artificial irrigation the 64% of the arable land that still depends on the rain for irrigation, there is no scope for further redistribution of land, as land holdings have already become uneconomical in most cases.

The only way to end rural deprivation, and for that matter deprivation everywhere in India,  is rapid industrialisation. All over the developed world, the rural people have become rich by shifting to modern industries, not by staying in the agricultural economy of the villages.

Socialism, which became our ruling mantra after independence, has led to decimation of even existing industries, what to say of development of new industries. Whatever prosperity we see in India of today, has come from the non-factory sectors of IT and Service, where socialism could not stall expansion.

So to end rural deprivation, we must immediately roll back socialism, finally completing separating economy and state. Like in the developed world, percentage of population of India dependent on agriculture will reduce to single digit, and all rural deprivation will end.

Our mainstream media is controlled by the Leftists. They talk of poverty and deprivation, but they make sure that readers never come to know that it is they who have caused the poverty and deprivation, by blocking industrialisation of India under various ruses, the Global Warming/Climate Change fraud being the latest. This is just not disinformation, it is political propaganda by a national daily.