Odd Delhi, Even Delhi: What Is At Stake

Media, and especially the TV news channels, is the most powerful entity in today’s world. It frames the narrative, it controls the narrative, and it makes sure that nothing outside the narrative reaches the masses. And media is not a neutral entity working for the interests of the people. It is just another group of human beings, in which each human being works for his own personal interest, and tries to promote that which will promote his own interest above everything else. Media persons have their ideological preferences, their political choices, and are amenable to monetary incentives, and are afraid of losing their livelihoods, just like persons in any other profession.
There is another industry that has neatly meshed with the media: the NGO industry. NGOs are organisations promoting various causes, fighting various issues, trying to solve various problems facing the people; and more they are seen working towards these aims, more funding they get, enabling those working in them become more financially sound. So they take up causes which make sense to laymen (though, as we would soon see, common sense is not always correct), use media very skilfully to create a scare, and then make sure that they are seen to be doing something about that which is at the root of the scare.
Delhi has always been just a seat of government. But with modern economy, it has become an economic hub also, as businesses found safety here. With businesses came jobs, and with jobs came people, and that created even more jobs, and so Delhi is now a jobs capital also. Jobs meant that people needed to commute, and that meant that ever more vehicles came onto the roads of Delhi.
Being the seat of the government, the core of Delhi has single storey bungalows. Industries and businesses therefore first went to periphery, and then to suburbs like Sahibabad, NOIDA, Faridabad, and lately Gurgaon. Therefore, people are all the time travelling between these business hubs, crossing the core. Delhi, especially the core, has a very dense tree cover also. And large areas in Delhi are unpaved, including spaces on either side of the roads.
Winter temperatures are low in Delhi. Trees lower it even more, and make air circulation difficult. Delhi is located on the eastern boundary of a vast desert. So wind is always dust laden in any case. With poor air circulation, fumes from the vehicle exhausts stay longer, making air quality poor.
This poor quality air of Delhi has caught the fancy of activist class of India. Being the Leftists, the activist class hates all prosperity, and cars are the best symbol of the rising prosperity of India.
Most of the vehicular pollution in Delhi is caused by trucks, buses, and two wheelers, but Leftists are always careful to zero in on the symbols that are associated with the rich. So they have successfully branded the cars as the chief villains.
And for every problem, the Leftists have only one solution: clamp down on or regulate the economic activity. And therefore, they have decided that to make Delhi pollution free, people must be prevented from using their cars. To begin with, they have curtailed the car usage to 50%, by mandating that on a given date, only the odd or even numbered cars will ply on the roads of Delhi, depending on whether the date is odd or even. That is, they have rationed the car usage in Delhi.
First, the pollution. Delhi has pollution. And a government has the police powers to regulate the things to ensure public health. But is pollution in Delhi so alarming that the police powers needed to be used? 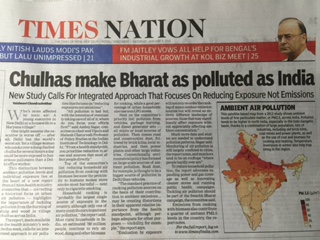 As a report in The Times of India today brings out, a housewife in a village home in India has to breath a far more polluted air for many hours daily than a Delhite ever does.
In fact, an average farmer in India inhales more dust in a day’s work at his farm than a Delhite does over many weeks.
So, the situation in Delhi is not so alarming as to warrant the use of police powers of government to regulate people’s behaviour to secure public health. It is more a false crisis created by the NGOs, using media and an activist judiciary that has become habituated to enjoy the status of real administrators of India.
Leftists use emotional appeals to force people to submit. And that is apparent in case of odd even plan of Delhi also. They have drafted children in the ads appealing for people’s cooperation. And in any case, Indians are very submissive and pliant people. Therefore Delhites have submitted to the odd even plan. But do the Delhites, and Indians in general, know what is at stake? 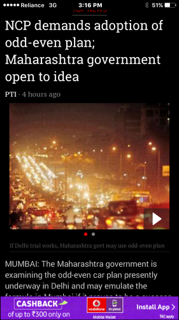 The odd even plan of Delhi is essentially rationing, the system so dear to the Leftists, the core of their worldview. What the Delhites and the Indians do not realise that once they accept rationing as a solution to a problem which has many other solutions, the governments will always go for rationing. The rationing leaves tax money for use on freebies on the vote banks, gives enormous powers to the politicians and bureaucrats, and is always easier than other better and real solutions. Delhi’s pollution problem can be best solved by cutting trees on main roads to begin with, increasing FSI so that only Highrises are constructed which would reduce travel and would create chimney effect taking air up and thus forcing air circulation; by quickly completing the third phase of Metro and starting work on the fourth phase. These measures would actually reduce the pollution, and would give fillip to the economy, creating prosperity that would replace chulhas in villages with LPG gas stoves, reducing pollution for all Indians, not just for the Delhites.
Leftists can only think of rationing. But why should the Indians submit to it? They should know that rationing would not stop at Delhi, and would not stop at cars. Soon everything in their lives would get rationed. As the demands have started to be raised to replicate Delhi odd even scheme in other cities also, soon Indians would lose their freedoms to rationing. After all, world never runs out of the problems, and a temporary solution can always be shown to be there by forcing people to behave in a certain way.
But rationing strangulates economy, as the Indians who have seen the years between 1947 and 1991 would readily agree. A rationed world is a world of poverty, unemployment, shortages, corruption,crime, political and bureaucratic overlordships, decay, and collapse.
Delhites and Indians need to wake up, and need to oppose this sinister rationing scheme of car days tooth and nail. Because once people start surrendering their freedoms, it all ends in total slavery, from which escape is very difficult.