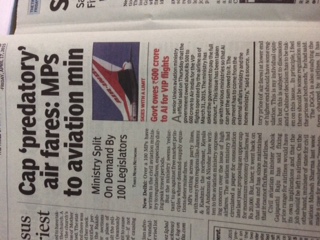 MPs demand cap on so called predatory fares. Any government interference would destroy this rare success story of Liberalisation in India, would drive fares up, not down, would lead to shortage of flights and would finally strangulate aviation industry in India to death, which is already struggling to survive the slow down in economy created by the UPA government.

MPs may do well to recall that in ’90s, before aviation was opened to private players, air fares were at least 4 to 5 times higher than they are now (adjusted against inflation), getting seat on a flight was more difficult than getting seat on a train is now. Average Indian never even contemplated flying, whatever be the emergency. Though the carrier, Indian Airlines, was a government owned company, not owned by some bloodsucking capitalist.

Therefore the lawmakers should leave the Civil Aviation alone. Your kiss of love would actually be kiss of death for the fliers.

Government must reject the demand.