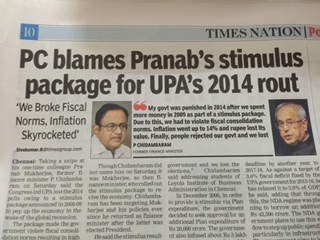 Former finance minister P Chidambaram has accepted that it was because Congress destroyed Indian economy that it lost the 2014 elections. He has also accepted that inflation results from government spending more money that it earns.

But he has not added that it was simultaneous dismantling of Indian economy by the then Environment minister Jairam Ramesh that literally choked economic activity in India. This led to investors withdrawing from India, domestic businessmen shelving plans to start new ventures, and effect cascading to all sectors of economy. So jobs disappeared, and businesses that were started in the hope of high growth rate continuing, were left with no demand, and thus were unable to repay high cost debts taken.