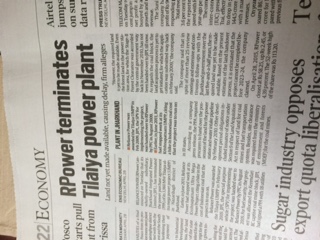 Reliance Power has terminated its project of the construction of a 3960MW power plant in Jharkhand. Reason…… well simple, it could not get the land.

So what will be the consequences? A blood sucking capitalist will not be able to skin alive people who could have worked in the plant. So many workers saved from exploitation. No CO2 emissions, so Environment also stays safe. No use of forest land, so forests and all animals in it also stay safe. We must thank the bureaucrats who could not acquire land in five years (process started in 2010).

Actually the consequences are:

1. All those who could have got employment in the plant proper, will stay without jobs.

2. All those who would have constructed the plant, would stay jobless.

3. All those companies who would have supplied the equipment to the plant, will not get the orders, therefore won’t hire more, or would even lay off those already working there.

4. The company that would have laid the transmission line will not get the order, and would therefore either would not hire more, or even lay off the workers.

5. Those who would have worked in the coal mine supplying the coal to the plant, would not get jobs.

6. Those who would have laid the Railway line to the plant, would not get jobs.

7. The plant would have had a hospital also. Those doctors would not get the jobs, Nor the nurses. Nurses may have to go to Gulf, to be kidnapped.

8. The plant would have had a school also. Those teachers would not get the job. In most cases, plant schools admit local children also. They will not get a modern education.

9. The plant would have had a shopping centre also. Those shopkeepers would remain jobless.So would those who could have supplied to them.

10. Those working in the plant would have taken flights to Ranchi. That many seats would remain unsold. Airlines would go out of business, rendering its employees jobless.

11. All the truckers, bus drivers, taxi drivers, who would have served the plant and its staff, would remain jobless.

12. Jharkhand government would not collect all those taxes. Its expenditure on courts, police, roads will suffer.

13. This much electricity will remain unavailable. All those businesses which could have run on it would remain unopened/under-utilised.

I could go on and on. When an industry is so blocked, paralysis travels in all directions. Except to the politicians and bureaucrats. Politicians get to institute that many more freebies to all those who stay jobless, and bureaucrats would earn huge amounts dispensing those freebies.

That is how we are supposed to compete with China.