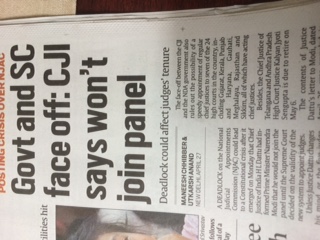 In an unprecedented and dangerous move, the Chief Justice of India, Sh H L Dattu has refused to join the NJAC panel.

The NJAC Act is a law enacted by the parliament of India. It has not yet been struck down by a bench of the Supreme Court, nor been stayed.

The NJAC Act may indeed be unconstitutional, or it may not be. That is to be decided by the bench hearing it.

But till that is decided by the bench, or it is stayed pending the decision, the CJI is constitutionally bound to obey it. His personal opinion of it doesn’t count.

If what he is doing is lawful, then a citizen can go and challenge any law he dislikes, and refuse to obey it till its constitutionality is decided.

What is happening is the logical result of Oligarchy-isation of India, in which authority of the elected government is being progressively drained by various Courts, Commissions, and Tribunals; reducing the government to an ornamental fixture serving the Hermit-Kings.

That is not what our Constitution envisages.