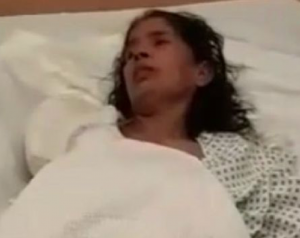 In a tragic incident, hand of an Indian woman working in Saudi Arabia was chopped off by the woman whom she was working for as a maid. This happened when the woman tried to escape from the house she was working at, after a three month long hellish life.

“India’s foreign ministry has complained to the Saudi Arabian authorities following an alleged “brutal” attack on a 58-year-old Indian woman in Riyadh.

Kasturi Munirathinam’s right arm was chopped off, allegedly by her employer, when she tried to escape from their house last week, reports say.

Ms Munirathinam was working as a domestic help. She is recovering in hospital.

Her family has alleged that she was being tortured by her Saudi employers.

Saudi authorities have not commented on the incident yet…….

………The family of Ms Munirathinam in the southern Indian city of Chennai said that her employers had been “angered” after she complained about the “harassment” she was facing at her employer’s home, where she had begun working three months ago.

They are asking the government to secure them compensation from the family, and also help pay Ms Munirathinam’s medical expenses.

“Ever since she went to work with this family in July, things were not alright. My mother was not even allowed to speak to us over the phone, she was not given proper food and was forced to work long hours,” her son S Kumar told BBC Hindi.

“When she tried to escape the harassment and torture, her right arm was chopped off by the woman employer. Now my sister can’t even sit and do simple things on her own, as her spinal cord has also been injured,” her sister S Vijayakumari added.”(from the news report.)

The most important question to ask in the whole matter is that why a 58 year old Indian woman should have to work as a maid? And that too in Saudi Arabia, of all places? That country doesn’t allow a woman out alone, the woman has to be dressed in a particular way (In one horrible incident, girls escaping from a burning school were pushed back in because they were not sufficiently covered.), and has very disabling restrictions on expat workers.

The fact is that “export of girmitia mazdoors” from India has not stopped, even after Independence. This is because the Leftists ruling India for last sixty seven years have created a socialist hellhole, in which the only way to have a shot at a decent life is to get out of the country and seek work elsewhere. Daily we scrap projects, daily we refuse/withdraw all sorts of “clearances and permissions,” daily we shut down industries and factories, our labour laws have created a Trade Union mafia that keeps a large number of plants shut at any given time. All this has created an atmosphere in which investors, both domestic and foreigners, get the unequivocal message that it is a wise thing to keep away from investing in India.

We clap when all sorts of charlatans in politics abuse our industrialists, we keep quiet when wealth creators are called names. We are such economic illiterates that all sorts of righteous “economists” get away by telling us that we are poor only because the wealth is not being “fairly” reattributed. We cheer when a man who lives in a six bedroom government provided bungalow tells impoverished farmers that he won’t allow land to be given to the industrialists, though the industries would provide decent employment to the children of the farmers, and lift them out of poverty.

Women being forced to work in the hellholes abroad, nurses being forced to work in terrorist controlled territories, workers being forced to work in places where bullets fly overhead: is the biggest indictment of the Indian ruling elite that has ruled India for last sixty seven years. Through control of media, it is able to block discussion of what it has wrought, through its patronage network it gets academicians and “intellectual” to put positive spin on the horrific consequences of its policies, but fact remains that that woman lost her hand because Leftists won’t let her work in India itself.

(To read similar past articles, click on the titles below:-Ed)

1. 68 Indians Detained In Washington For Illegally Entering The US

2. This Is Not POSCO Plant On Hold, But Our Jobs On Hold

3. The Black Hole Where Our Jobs Disappear