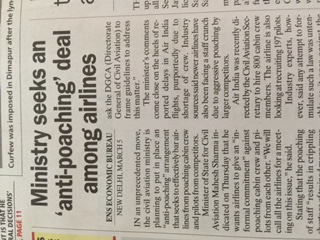 The Indian Express of today, in a front page news, reports that Ministry of Civil Aviation is trying to force Airlines to agree on anti-poaching arrangements. The move is anti-free market, reminiscent of license-permit-quota raj. It vividly demonstrates that BJP’s economics is not much different from that of CPM. It will have the same consequences as any other socialist interference in the market. That is, it will lead to poorer options for all.

“In an unprecedented move, the civil aviation ministry is planning to put in place an “anti-poaching” arrangement that seeks to effectively bar airlines from poaching cabin crew and pilots from competitors.

Minister of State for Civil Aviation Mahesh Sharma indicated on Thursday that he wants airlines to give an “informal commitment” against poaching cabin crew and pilots from each other. “We will call all the airlines for a meeting on this issue,” he said.

Stating that the poaching of staff “results in crippling shortage of trained manpower for airlines”, he said, “We can ask the DGCA (Directorate General of Civil Aviation) to frame guidelines to address this matter.”

The minister’s comments come close on the heels of reported delays in Air India flights, purportedly due to shortage of crew. Industry sources said newer airlines have also been facing a staff crunch due to aggressive poaching by larger competitors.

Air India was recently directed by the Civil Aviation Secretary to hire 800 cabin crew members. The airline is also looking at recruiting 197 pilots.

Industry experts, however, said any attempt to formulate such a law was untenable as it goes against the continued on norms of a free market.

“Such a pact would interfere with freedom of trade and profession of cabin crew and pilots. It will be against their service contracts. It is a non-starter. The role of the government is to regulate and not interfere in day-to-day operations. There should be free movement of capital and resources,” said Ramesh Vaidyanathan, managing partner, Advaya Legal.

“In a free market economy, pilots should be free to move across employers. Airlines that spend money on training etc can always recover the same in part or full, from departing pilots as per the employment contract. Pilots in India suffer an unduly high notice period of six months instead of two-three months,” said Amber Dubey, partner and India head of aerospace and defence at global consultancy KPMG.” (from the news report.)