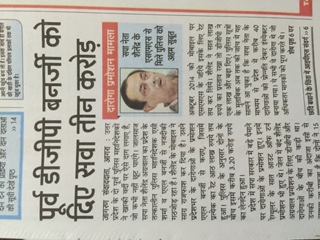 On 27th August 2013, in the Kawal village of Muzaffarnagar district of Uttar Pradesh, two cousins were brutally killed when they objected to molestation of a girl in the family.

On being informed by local police of the murders, the DM and the SSP of Muzaffarnagar reached the spot, and after raids in the locality where the murders took place, detained 6 suspects.

The DM and the SSP were transferred the same night, and officers who replaced them took charge the next morning.

On 28th August 2013, the 6 detainess were released, and 11 members of the girl’s family, the family whose two boys were brutally murdered the previous day, were arrested. Of the 11 arrested, 6 had NSA slapped on them.

On 31st August 2013, a rally was held at Nangla Mandaud, a village close to Kawal, to demand release of the 11 members of the girl’s family. The rally ended with the declaration that if these 11 persons were not released by 6th September 2013, again a rally would be held there on 7th September 2013.

The 11 persons were not released, so the rally was held on 7th September. Rally goers on way back home were attacked a 6 different places, and many were killed and a large number were injured.

Next day, on 8th September 2013, rioting erupted across villages which had seen dead and injured from the rally.

On 10th September 2013, IG police announced in a press conference that all the 11 persons from girl’s family were innocent, and were being released. Rioting stopped. But by that time, over 68 persons lay dead, and Muzaffarnagar district had been scarred forever. It is now one big rural Karachi, with regular killings traceable back to the riots of 2013.

The men who took over as its DM and SSP on 28th August 2013, were IAS and IPS officers respectively, not the functionaries/leaders of ruling party or any other party. Still, apparently, how could the district apparatus could do the bidding of politicians so readily?

What are the reasons?

A former DG of police in UP is facing allegations that he took as bribes Rs 3.2 crore in promoting 40 sub-inspectors to inspectors. This is about just one selection. It doesn’t include the amount such officers might be making in other selections and trasnfer/postings of officers under them, or might be getting as their share of bribe money collected at lower levels.

So if a DGP is transferred out of his post, he is likely to lose rupees in double digits of crores at least. That is, many many times more than his total life time salary. So, in fact transfer for him is far worse than his dismissal from service. And the state government doesn’t have powers to dismiss him from service, but it has powers to transfer him.

And of course the sub-inspectors who each allegedly paid the Rs 8 lakh bribe, must have earned at least that much in bribes, and must be hoping to handsomely increase their bribe earnings on promotion.

And so we see, in most states, government servants having become putties in the hands of politicians, behaving like their personal armies.

And therefore, members of vote banks of ruling party in most states enjoy complete immunity from law. They can kill, rape, loot, and riot with impunity. Secure in the knowledge that state apparatus will not act against them, because if it does, officers will get transferred out immediately, and that would mean loss of crores of rupees for the officers.

And most officers, corrupt to the core, have forgotten the oath to protect Constitution of India, and protect vote banks of ruling party instead. Life has become hellish for those not members of the vote bank of the ruling party.

India is on a very dangerous turn because of this protection the vote banks are enjoying because of corruption of the state apparatus. Because people have a tolerance threshold, and as the atrocities by the members of the vote banks escalate as they would if they are granted immunity from law, explosions like Muzaffarnagar in 2013 would become more frequent and common. This will seriously damage economic actvities in such states, spreading unemployment, poverty, and anger in the population, forming a vicious cycle.

Corruption has made state apparatus just one more mafia gang in town, which runs extortion rackets much like real mafia gangs. This has seriously eroded the authority of State, and consequent lawlessness and culture of crime. And that is damaging economic activities, causing wide spread economic distress.

Having independent recruitment agencies like UPSC has become meaningless, and so has become Constitutional protection available to government servants against removal from service. Because bribes have become the real salaries, and politicians through their powers of transfer and postings decide who will earn bribes and who will not, and therefore politicians have become the real recruiters and have come to acquire the power to “remove” from service the government servants (because a transfer may mean loss of bribes for the government servant equal to many times his total life time salary), and completely arbitrarily at that, for which they are not answerable to even courts.

And politicians need to win elections, and therefore do the biddings of their vote banks. If the vote banks demand immunity from law, they are readily granted.

And therefore in most of the northern and eastern states of India, it is the rule of vote banks, not the rule of law.

(Click here to read the news report in the web edition of the paper.)