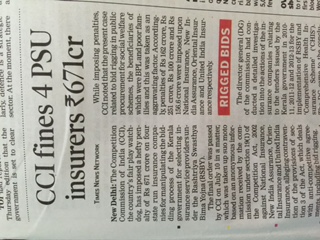 Competition Commission of India (CCI), a body that should have never come into existence in an economy that hopes to be an economy of economic freedom for all its citizens, exists, and is happily passing unconstitutional orders based on its “feelings.”

It suo moto investigated a case of the tenders floated by Kerala government in which four PSUs owned by the government of India participated, and has concluded that they rigged the process, and has imposed a fine of Rs 671 crores.

“The final order was passed by CCI on July 10 in a matter, which was taken up suo moto based on an anonymous information received by the commission under section 19(1) of the Competition Act, 2002 against National Insurance, New India Assurance, Oriental Insurance and United India Insurance, alleging contravention of the provisions of section 3 of the Act, which deals with anti-competitive agreements, including bid rigging.

CCI noted the impugned conduct of these companies has resulted in manipulation of the bidding process in contravention of various provisions of the Act.

While imposing penalties, CCI noted that the present case related to bid rigging in public procurement for social welfare schemes, the beneficiaries of which were BPL and poor families and this was taken as an aggravating factor. Accordingly, penalties of Rs 162 crore, Rs 251 crore, Rs 100 crore and Rs 156.6 crore were imposed upon National Insurance, New India Assurance, Oriental Insurance and United India Insurance respectively.

The director general (DG) of the commission had conducted a detailed investigation into the actions of the insurance companies relating to the tenders issued by the Kerala government in 2010-11, 2011-12 and 2012-13 for the implementation of RSBY and ‘Comprehensive Health Insurance Scheme’ (‘CHIS’). The DG came to the conclusion that the insurance companies colluded with each other and manipulated the tendering process initiated by the Kerala government.”(from the news item.)

(Why Competition Commission of India is unconstitutional, to know, click here.-Ed)