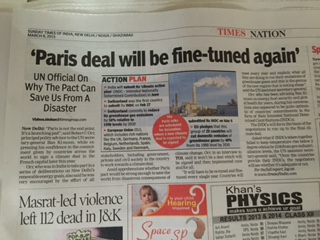 UN is a grouping of Dollar bureaucrats, talking shop for the tyrants and thugs ruling various  third world countries around the world, and Left’s current favourite handle to destroy free economy around the world.

As the Global Warming/Climate change fraud has come as a Godsend for Leftists everywhere, the Leftists at the UN are taking lead in scaring countries around the world into accepting suicidal “Climate deal” and destroy their economies.

Currently focus is on India to make her accept the proposed deal to be discussed in Paris later this year. And therefore UN bureaucrats are frequently visiting India, and it is highly likely that even the present NDA government, believer in the Global Warming fraud as it is, will go along.