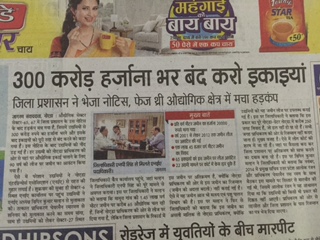 1. NOIDA industrial development authority, a department of the govt of UP, allots industrial plots to entrepreneurs. They pay the cost, set up factories, start production, employing tens of thousands, and paying  thousands of crores in taxes.

2. The district administration wakes up one fine morning and discovers that the land was never transferred to the NOIDA industrial development authority. The land actually belonged to Animal Husbandry and Fisheries Department of UP. (Yes, there is a department called Animal Husbandry and Fisheries Department, which evidently owns land, but doesn’t take care of the land in its name. It is also not known how much is the fish production of UP)

3. So now that the district administration has come to know that NOIDA industrial development authority has transferred land to the factories, the land which it never owned, what is its solution? Has it asked NOIDA industrial development authority to probe the matter and fix responsibility as to who did this, and after that pay the owner department the cost of land it recovered from the factory owners? Has it asked the Animal Husbandry and Fisheries Department of UP as to why it failed to safeguard its land, and who is responsible for this loss of government land? No. It has done nothing of the sort. It has hit at the weakest link in the chain. Who are the weakest link in the chain? The private citizens who committed the gravest crime of following all the procedures, paid the cost of the land, set up factories, and are providing employments to thousands and paying thousands of crores in taxes.

4. And its solution? It has directed the factory owners to deposit Rs 300 crores into the government treasury and then shut down the factories and go home.

State in India has become more like a mafia gang, extorting money from the hapless who commit the sin of doing business in India. Even when a government department commits error, the penalty is to be paid by some businessman.

Nobody can do business in such an arbitrary, thuggish environment. The environment in which after you have paid bribes to all the 54 inspectors, obtained all the permissions and clearances, and have started production, along comes 55th inspector, whose existence was never revealed to you, who had no business to exist in fact, and he announces that all those 54 permissions and clearances you obtained after paying huge bribes are junk, because you never approached him. And not only those 54 inspectors just shrug and walk away, but also the whole system comes on you rushing like a truck of bricks. You curse the day you decided to do business in India, you curse the day you were born, you  curse the world, as you are ruined out of existence.

Most people figure out that instead of investing all the hard earned savings in India, and get branded a criminal and get ruined, it is better to spend that money on obtaining visa to some foreign country.

And then we cry why 75% of us are still living in villages on less than Rs 5000 per month.

The saddest part is that not only these thugs actually control lives of 125 crore human beings, they live off them.