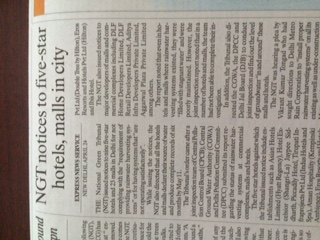 Hearing a petition seeking directions to DMRC to install water harvesting systems on all its buildings, stations, and tracks, the National Green Tribunal has also issued notices to many 5 star hotels and Malls which are not having water harvesting systems, or where such systems are not functioning properly. Is this not a suo moto action (notice to 5 stars and malls) on the part of NGT, for which it has no powers?

If these establishments had water harvesting systems in their approved plans, when these plans were submitted for approval, but have not constructed them, then they are liable to action.

But in all such cases in which initial plan had no provision to provide water harvesting system, asking them to do so is tyranny.

State can not force citizens to do such things. All it can do is, to charge actual cost of water supplied to them, and in fact from everybody to whom it supplies water. If they find that they would save money by harvesting water, they would do so. Otherwise to force them to spend money on costlier alternatives is legal tyranny, anti-freedom, anti-free market, and unconstitutional.

Water harvesting sounds good on paper. But it has to prove its worth in money. If bringing water to a place costs more than harvesting it, then it is worth going for. Otherwise it is wastage of capital, the most precious resource of any country.

Another argument in its favour may be that it helps keep water table constant. If that is the aim, then everybody must be asked to harvest water, not some selected establishments. In fact the whole city rain water must be harvested in such a case where keeping water table constant is the aim, and this water should be supplied to the farmers around the city, because what lowers water table the most is the use of groundwater in farming. Or harvesting system may be so designed that the water directly goes into ground, instead of into costly storage.

Without studying all these aspects of cost, possibility of construction in an existing building, and its aim; mandating water harvesting is whimsical and arbitrary.

In a country that is run on such whims and arbitrariness, commerce and business quickly dies.