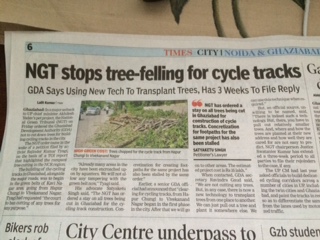 Greens fancy cycle tracks. According to them, they keep the earth from boiling over. Rich European countries have wasted huge money on cycle tracks (and many have gone bankrupt because of such wastage). Indians who go to visit Europe, on government paid “study tours” or NGO sponsored “study tours,” pick up such idiocies, and using their official positions, or using ever ready to oblige Courts or Tribunals, force pauper Indian government bodies to waste money they don’t have, on those idiocies; only to discover later that nobody is using them, or number of users never justified the money wasted.

Now another problem has foxed the Greens. Cycle tracks need cutting down of trees. So they are in a dilemma as to what to prefer– trees or cycle tracks. Let us see which way they decide.

We have nothing against trees. But from an Act prohibiting cutting of trees in forests, most desirable and logical, unless it be for a mine or a dam or a road or a Railway line; the prohibition soon spread right into private property of citizens. You can’t cut tree even on your own land, without permissions from some government body. A gross violation of private property rights, and huge source of bribes and harassment of citizens.

Trees in cities further cause problems. They prevent free flow of air, trapping dust and smoke, and making air polluted. Of course Greens would demand ban on cars to solve the problem caused by more trees than required in a city. Trees look better in forests than in cities, where they should be sparse, small ones, and preferably in places like parks, or separate plots earmarked for them.