SC To Levy Tax: A Mediocre Ruling Class Is Destroying Core Of Democracy And Liberty 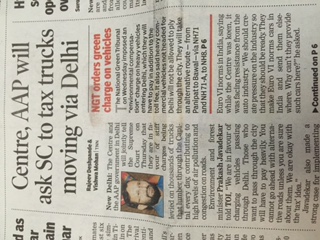 “No taxation without representation” is the sacred war cry of various struggles to secure Liberty by the citizens during last at least 800 years, from the days of Magna Carta. American War of Independence was fought with this slogan. Various English revolutions and Civil wars were fought around this principle.

Who can have the power to levy tax is at the core of the the whole theory of government in the Common Law countries. The people who believe that the individual is born free with certain unalienable Rights, that individuals come together to have a government for themselves to secure these Rights, and permit this government to levy taxes to meet its expenditure; are the people who have given rise to the freest and most prosperous countries on the earth: The Anglosphere countries. In all these countries, taxation is always the most sensitive issue, and the Constitutions in all lay down that only the House with the most direct representation and closest to the people only has power to levy taxes. For example, in India the Upper House of Parliament, Rajya Sabha, can not originate money bills, nor it can block them.

This is a core principle. In addition, it is also well understood that tax is to be levied only to raise money to meet the legitimate functions of the government, and can not be used to change people’s behaviour, or to redistribute wealth.

But Indian ruling elite, under constant pressure from the Leftists, is allowing this core principle to be corroded away. Leftism originated on the European continent in which the countries have Civil Law, and not the Common Law, and weak democratic traditions which are always under threat by various totalitarians. No wonder the Leftist thought itself is anti-democratic, having taken the qualities of the soil from which it grew.

So it is shocking but not very surprising that the both, the Central and State government of Delhi are asking Supreme Court of India to levy tax on the trucks passing through Delhi. And it goes to show how the Leftists have dulled the minds in India, and dimmed the knowledge of how the Liberty and Freedom developed in the Anglosphere, that this stand of the two governments has attracted no comments from the Constitutional experts. This  should have raised the veritable storm, this unconstitutional and illegal delegation to courts of the power to levy tax, but this aspect of the statement from the two governments has attracted no comment  from any quarters. 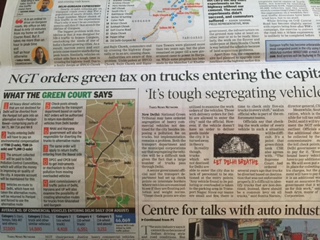 Of course the trucks pass through Delhi simply because in last 67 years the governments have not constructed a bypass for Delhi. They waste the tax money on freebies to buy votes, instead of creating proper infrastructure. And Delhi is polluted because it has been very late in acquiring the Metro rail network, it doesn’t have adequate numbers of flyovers, it has too much of unpaved areas, and it has too many trees for a city, which block air circulation. Delhi is polluted because it has very low FSI, necessitating too long travels to and from work. Instead of addressing these issues, the governments have chosen the easy cop out, and have also junked the Constitution and Law and Principles in the process.

A people who have lost the knowledge of ideas of Freedom and Liberty would not defend them when these will be taken away from them. Socialism has destroyed Indian education, so Indians are now mostly illiterate of animating ideas of Common Law. Total silent on this most egregious aspect of the whole issue is most alarming. Our ruling elite has become so mediocre that what to say of defending the Freedom and Liberty, it doesn’t even know that they are being destroyed. Courts and Tribunals levying taxes is burning down the whole edifice of the Constitution and rule of law. It points to a very dark future for Freedom, Liberty, and Democracy in India.