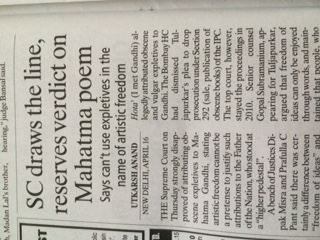 “Is it not a collective responsibility of the nation to respect Mahatma Gandhi? What is this? You cannot respect an ideal but can vulgarise the man who gave these ideals in the garb and guise of artistic freedom,” the bench said.” (from the news item)

No Milords, it is not the collective responsibility of the nation to respect Mahatma Gandhi, nor anybody else.

Insulting somebody may be wrong, but can not be made illegal also, it can not be made a crime. Because, insult is in the eye of beholder. In fact, it may taken as insulting by many people to have to respect a dhimmi like Mahatma Gandhi, who has inflicted the worst kind of misery on India, that would some day destroy it: the incomplete partition. And equally calamitous was his foisting on nation of Nehru, another dhimmi and a socialist to boot, who has destroyed Indian secularism by replacing it with appeasement, and has condemned country to the abject poverty by inflicting socialism on it.

Freedom of Expression, the most basic Freedom, the pre-requisite to being human, has not been properly understood in India. The misinterpretation has been compounded by the feudal mindset, the mai-baap culture in which ruling class thinks itself as above the ordinary citizens, not as equal human beings tasked with certain specific duties. Ordinary citizens have also internalised the meme, and therefore many laws infringing Freedom Of Expression have been allowed to stand on statute books.

And now this whole new crime has been added to the list, by the propensity of SC to make laws through “interpretations,” a wholly unconstitutional and very dangerous practice. This is totally wrong conclusion by the SC.