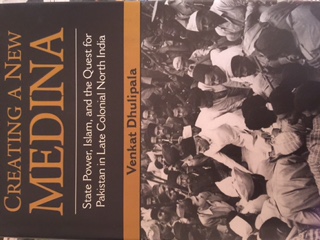 The Leftists who wrote our history, and control the narrative, present the holocaust that was partition of 1947 as the result of power lust of Jinnah at best, and intransigence of Nehru at worst.

In reality, it was a very well thought and deliberated plan to have a sovereign enclave on the Indian sub-continent, to be used as the base to “liberate”  the whole sub-continent, that is, to subjugate the kafirs once again. And the plan is progressing well.

This is amply brought out in a new, very well researched; objectively and forthrightly written book by the author who has cared to look beyond the Leftist haze of lies and dissembling.

In Creating A New Medina, Venkat Dhulipala has gone where hardly anybody dares to go. He explores the theological forces that created Pakistan, and that are controlling its polity even today. The book is a must read for all who hope to counter the monster on our west (and now on our east also) that plans to consume us all.

The book is a danger to the whole narrative of the Left that projects minorities as the victims in India. And therefore, the Left would try to push it down the Memoryhole the way it did Tavleen Singh’s great book Durbar. The book will not be reviewed by any mainstream newspaper/magazine, it will not be praised, nor criticised, it will not be quoted from, nor mentioned on TV, it will not be prescribed as a textbook by any university. The Left would just pretend that this book does not exist.

Amazon describes the book as:

“This book examines how the idea of Pakistan was articulated and debated in the public sphere and how popular enthusiasm was generated for its successful achievement, especially in the crucial province of UP (now Uttar Pradesh) in the last decade of British colonial rule in India. It argues that Pakistan was not a simply a vague idea that serendipitously emerged as a nation-state, but was popularly imagined as a sovereign Islamic State, a new Medina, as some called it. In this regard, it was envisaged as the harbinger of Islam’s renewal and rise in the twentieth century, the new leader and protector of the global community of Muslims, and a worthy successor to the defunct Turkish Caliphate. The book also specifically foregrounds the critical role played by Deobandi ulama in articulating this imagined national community with an awareness of Pakistan’s global historical significance.”