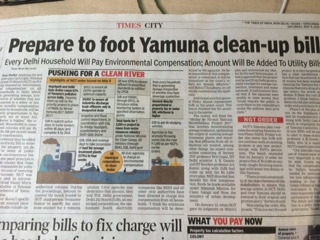 All over the world, the power to levy taxes is considered to be the most sensitive power. With this power, the government takes from citizens their personal money. Therefore, at least in democracies, by design this power is given to the House of legislature closest to the people, and whose members are most directly elected by the people. For example, in India, all proposals to levy taxes have to originate in Lok Sabha only. Even Rajya Sabha is not given this power.

“No taxation without representation” was the slogan that led to American Revolution and birth of a Nation-the US.

Courts have also religiously followed the sanctity of this principle-that only the representative body closest to the people can levy taxes.

But now the National Green Tribunal, the unconstitutional tribunal that should not be there in the first place, has violated this most sacred principle of democracies.

In the name of “Environment Compensation,” it has effectively levied a tax on all households of Delhi, without even hearing them, to meet the cost of sewage treatment plants. In fact, on its front page the Times Of India calls this compensation a “tax” only.

Delhi municipalities already raise taxes from the residents of Delhi, and so does the Delhi government. Sanitation is the primary duty of a municipality, and residents of Delhi elect them to carry out such tasks only. If Delhi doesn’t have a sewage disposal system, it should be gone into why it doesn’t, what is being done with the taxes collected from the residents, whether they need to be raised. If municipality doesn’t behave, there is Delhi government, and finally Central government.

But a tribunal imposing a tax on citizens is thoroughly unconstitutional, illegal, and most objectionable.

Citizens must immediately approach appellate court to get the order quashed, and/or the Supreme Court should suo moto set aside this order.

If such illegalities are allowed to go unchallenged, soon it will be free for all in the country, and it will not be rule of law, but rule of oligarchies.

To know why the National Green Tribunal is unconstitutional, read here.