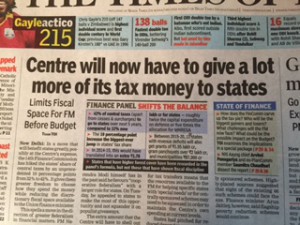 Nothing illustrates more vividly than the photograph above, that shows the headline of today’s Times of India (Delhi edition), how a news item can be presented to mean enitrely different thing than actual, depending upon the ideology and political leanings of a news outlet.

Prime Minister Narendra Modi has been a great votary of federalism and decentralization. To this end, he has made sure that the States’s share of tax revenue of the Centre is increased from 32% to 42%. Finance Commission recommmended so, and though under no compulsion to accept these recommendations, the Prime Minister readily accepted it.

But the Times Of India has so framed the headline as to so seem to a low information reader that the government was resisting, and the Finance Commission forced it. As usual, it has given more or less correct facts in the report that follows the headline, but the impression created by the headline is what will stay in the mind of the reader.

It is not known who is controlling the Indian media. But the whole main stream media of India is working full time to undermine the BJP government at the Centre, through such subtle manipulation of public mind.