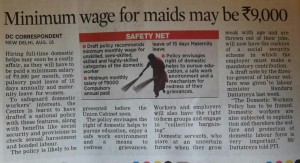 It is the complete divorce from reality that some folks indeed believe that maids are exploited in India. In reality, they are the most pampered, most cared for lot in India, with huge bargaining power, and leave of absence at will. Just as a maid cleaning up a home of all its valuables; or a maid, with the help of some males, murdering her employer doesn’t prove that all maids are criminals, so the stories hyped by media of maids being tortured or raped doesn’t mean that maids are being exploited. This law is the most stupid ever conceived by the mediocre bureaucracy of India, and would render maids jobless, or would make both the housewife and maid criminals as they would go off books to continue the employment. Almost all labour laws become applicable only if the number of employees cross a certain threshold in a business establishment, e.g, 20. To make homes employing one person (maid) the domain of labour inspectors and trade union thugs, the two groups that have killed industry after industry in India; only the Indian bureaucrats could come up with this stupid idea. To even think that our homes will become accessible to labour inspectors and trade union thugs is such an outlandish and roiling idea that it begs belief that it can even be contemplated. As for crimes against maids, laws already exist to deal with the criminals. Why the special law for maids? Lawyers in politics are a dangerous mix. It is the biggest conflict of interest possible. They who benefit the most from the labyrinth of laws  get to make laws.

An employment is a private contract between the employer and employee. State has to only ensure that the force is not being used by the either party, for which laws already exist. Beyond that, if the State interferes in this private contract, the result is always destruction of the employment. This has been the experience, in countries after countries, from the richest countries to the poorest countries. But politicians, always in terror of media reports, never learn the lesson. But laws which result from media hypes are mostly do more harm than they do the good. Because good laws evolve from the customs and morals of the society. Media cries of “government intervention” only lead to nervous reactions from the bureaucrats and the politicians.

This idea of Labour Laws for Maids must be immediately junked.

(To read an earlier post on the subject, click on the first title below. To know what Labour laws and trade unions do to industries, click on the second link.-Ed)

1.Govt Of India Is Planning To Destroy Jobs Of Maids In India (Is This What You Meant By Labour Reforms?)

2. A Journey From Modinagar To Manesar