MBAs And B Techs For Sweepers: The India The Leftists Created in 68 Years 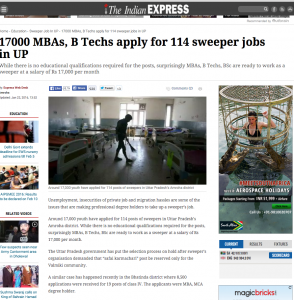 Last year, Aam Aadmi Party (AAP) government of Delhi presented its first budget. The leading highlight of the budget was claimed to be the fact that the government had doubled the allocation for education. This is still used as the logo line in all the advertisements of AAP.

Thomas Piketty, the alleged economist from France, recently, in an interview given to the Indian Express, advocated that the Indian government must raise taxes, and should spend the higher collections on education.

And now Infosys co-founder N R Narayana Murthy is saying that to have an innovative economy we must spend US$ 5 billion each year to send 10000 Indian students to the US for doing PhDs. 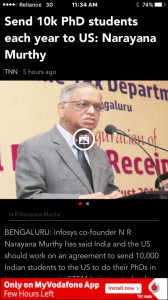 To an observer from Mars, just arrived in India for the first time, such pronouncements would seem to suggest that India is very short of educated men and women to take up the jobs which are being advertised, but are going vacant, and because of this, India continues to be poor.

But then, what would he make of the news that MBAs and B Techs are among the 17000 youth who have applied for sweepers’ jobs in the Amroha town of Uttar Pradesh, the town located just 100 km from Delhi?

The bitter and devastating fact of life for youth in India is not lack of education facilities, but lack of matching job opportunities available after completing education. 68 years of raging Socialism mean that India remains a pre-industrial, almost primitive economy, mostly driven by agriculture, which itself is woefully dependent on rains. And land holdings have so fragmented as a result of population explosion, that agriculture no longer provides meaningful employment to those engaged in it. They barely eke out a living, and any crop failure leads them to starvation.

And as opposition to Land Acquisition Bill of the present Central government showed, few in India are aware of the basic facts of Economics. The decision makers continue to be illiterate of Economics, the most essential Life Science. So there is no hope that the situation is going to improve any time soon.

Almost all Indians still view wealth as some sort of evil, and wealth creators as evil incarnates. They glorify poverty, call it a virtue, and instinctively believe that being poor by itself bestows virtues on man. They have no clarity on what is a job, how jobs get created, who consumes what workers produce, and why some countries are rich and the most are not. And so the Leftists are having free run in India, blocking industrialisation of India, keeping it wretchedly poor, and then devising schemes to “alleviate” poverty. The schemes which the Leftists then administer, and in the process, gather riches and live a grand life.

This din around “increase spending on education” is the latest in the series of stratagems the Left uses to keep Indian masses drugged. As the youth are entering work force, and discovering that only MGNREGA jobs await them, they are asking what happened to the jobs that were promised as a result of all those grand schemes of last 68 years. As a diversionary tactic, the Leftists have come up with this fraudulent theory that we are not having a modern economy because we are not spending enough on education. Of course the educated are not able to shout back that they are already educated, and still do not have modern jobs. The Leftists control media, the “intellectual class” is on its payroll through various think tanks and Universities. So the din gets louder by the day,” Increase spending on education, and all would be well.”

As an urgent education reform, all we need to do is start teaching of Economics very early in schools. So that the Left is no longer able to raise economic illiterates who fall for its schemes. Of course there are issues about quality of the graduates, but even the graduates with quality education from IITs and NITs are not getting within India itself the jobs they deserve. The quality of Indian education is poor because the teachers are dishonest and so they do not teach in classes, they are dishonest because socialism of last 68 years has created a culture of corruption in India. In a country in which over 90% of those who have opportunities to be corrupt are corrupt, teachers alone would not become honest, whatever increase is effected in spending on education.

(To read similar past articles, click on the titles below.-Ed)

2.The Black Hole Where Our Jobs Disappear