Spending On Education And Health: The Latest Con Of Indian Leftists

Q. Who are the two most important persons in our lives? Most benevolent, our best well wishers? A. Doctor and...
Read more

Much is being written on the New, Unafraid, Fearless India after the Brisbane test and the series win over...
Read more
अधिरथि 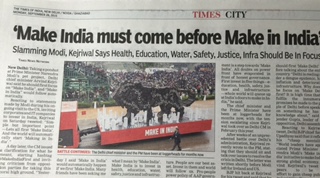 Amartya Sen, the current leading light of the Indian Left, was in India few weeks ago to promote his latest book. In his articles and TV appearances during the book promotion tour, he threw around a lot the line,”India is trying to industrialise with an undereducated and unhealthy work force. This has not been done before, and can not be done now.” What he was driving at was that to industrialise, India needs to increase governmental spend on education and healthcare. His followers in media and economically illiterate educated Indians lapped up the line. So much so that the Leftist Arvind Kejriwal used it to attack PM Modi’s initiative ‘Make In India’ in which he is trying to encourage investment in India. 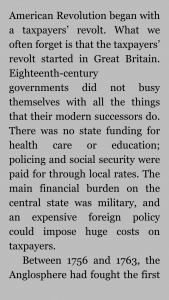 Education may be helpful to an individual citizen of a country in that it helps him become a better human being, and may help him beat his competitors for the same job, but the job itself is created by somebody’s industry/business/trade; not by his own education. This simple and obvious fact is sought to be obfuscated by the Leftists like Amartya Sen and Arvind Kejriwal. They know that the socialism they promote, profess, and practice doesn’t create jobs, it in fact kills jobs, it only keeps them and their likes in power. So to divert attention of the unemployed from this fact that socialism kills jobs, they are now singing that there is joblessness in India because we are not spending enough on education and health.

In reality, we have not run out of the educated. We have so many of educated, in fact, that we do not have matching jobs for them. Our PhDs and postgraduates are in fact fighting for the posts of peons. 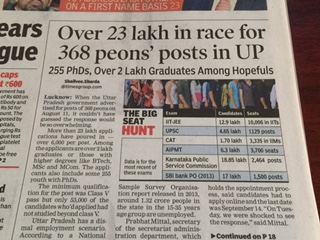 And our graduates aren’t physically unfit either. Lakhs of them gather at the recruitment centres for the security forces, which need highly fit youngmen, to compete for few hundred posts of constables and jawans, easily passing strenuous physical tests prescribed.

The fact is that 67 years of socialism have destroyed industries, businesses, trade; and consequently, jobs in India. As the jobless youth are questioning the messiahs of socialism as to where are the jobs they promised when they nationalised everything and put in place license, permit, quota, NOC raj, the Leftists have come up with this fraudulent claim that we do not have enough jobs for our youth because we are not spending enough on education and health.

With their control on media and academia, they can easily go through a couple of decades more parroting this fraudulent claim. But so long as we do not dismantle socialism in all its avatars, even our education and health services would not improve with more spend on them, they will only deteriorate further. Because socialism creates culture of corruption, and it is the corruption that has destroyed Indian education and its health services, not the alleged lack of funds.

What we need is complete separation of economy and state, the roll back of license/permit/quota/NOC/clearance Raj, so that we rapidly industrialise and our youth get the jobs they badly need. With increased national income, we can easily spend the needed amounts on education and health.

2. 68 Indians Detained In Washington For Illegally Entering The US

The Monstrosity That Is Regulatory State

The US Manufacturing Was Killed By Labour Unions And Regulators, Not By “Globalists”

Q. Who are the two most important persons in our lives? Most benevolent, our best well wishers? A. Doctor and Capitalist. And both are under brutal...
Read more

Much is being written on the New, Unafraid, Fearless India after the Brisbane test and the series win over Australia. Actually, the India that gets...
Read more

The Monstrosity That Is Regulatory State

Businessmen are not saints. They do everything to kill competition, everything. Otherwise competition kills their business. The most effective tactic is to use force. And force...
Read more
- Advertisement -