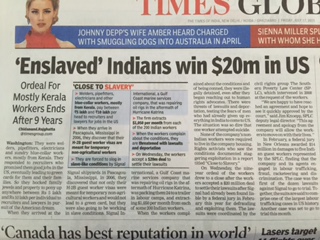 The Indian Left flaunts Kerala as its success story, citing its “social indicators” as the proof that Leftist policies work. Firstly, the better literacy rate and status of women are the doings of its enlightened kings and social reformers, and legacy of a strong matrilineal society, secondly, Kerala is the proof instead that once the Left takes over a place, even better literacy rate and better condition of women do not help. The place goes to economic ruin, with all those who can leave, leaving the place to earn their livelihood someplace else.

Stories of Kerala workers working in slave like conditions in the Gulf, and Kerala nurses risking their lives to work in some of the worst conflict zones and hellholes of the world, with every few months Indian government forced to rescue them, are well known by now. Of course when media reports these stories, it is careful never to connect the dots, never to trace the effect to its cause.

But now comes an equally horrible story of workers staking everything they had, to leave a Marxist heaven to go to work in the country of evil Capitalists- America. And as happens with workers without choices, they got enslaved there also. But, at least, unlike the Gulfie hellholes, these workers in America have been rescued and compensated by the Justice System there.

Of course, Indian Leftists would still continue to worship their overlords the Gulfies, and curse the great satan America. And would continue to wave the money order economy of Kerala in our face, as its achievement. Never letting anybody know the blood and tears behind those money orders.

“They were welders, pipefitters, electricians and sundry blue-collar workers, mostly from Kerala. They responded to recruiters who promised them good jobs in the US, eventually leading to green cards for them and their families. So they hocked family jewels and property to pony up anywhere between Rs 5 lakh and Rs 10 lakh per individual to recruiters and lawyers in pursuit of the American dream.

When they arrived at the Signal shipyards in Pascagoula, Mississippi, in 2006, they discovered that not only their H-2B guest worker visas were meant for temporary non-agricultural workers and would not lead to a green card, but they were also going to be working in slave conditions. Signal International, a Gulf Coast marine services company that was repairing oil rigs in the aftermath of Hurricane Katrina, was packing them 24 to a trailer in labour camps, and extracting $1,050 per month from each of some 200 Indian workers.

When the workers compl8ained about the conditions and of being conned, they were illegally detained, even after they began reaching out to human rights advocates. There were threats of lawsuits and deportation, testing the fears of men who had already given up everything in India to come to US. The situation was so dire that one worker attempted suicide.”(from the news report)

2.Land Bill & Rahul Gandhi: Politics As The Stand Up Comedy

3.The Black Hole Where Our Jobs Disappear